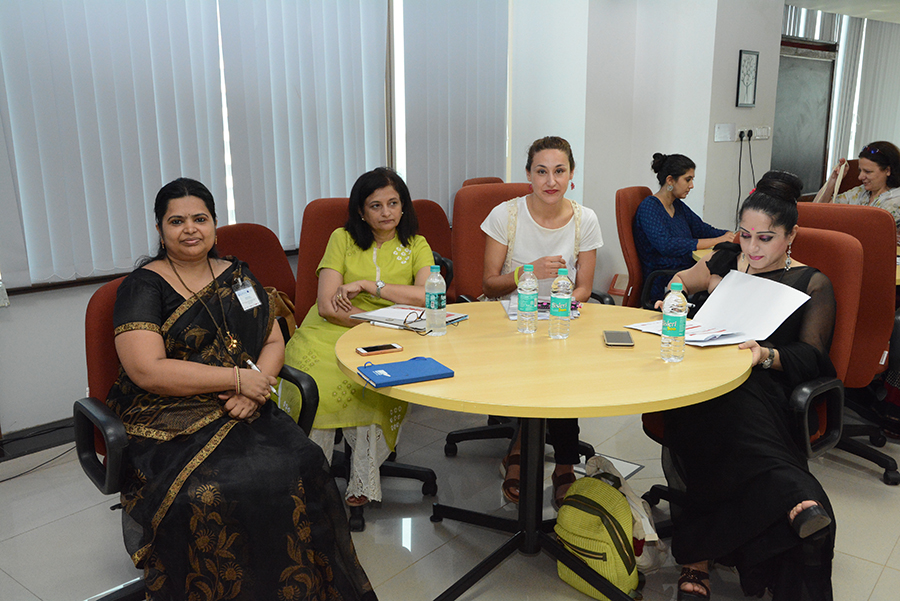 The fourth open CLIL Intensive Training Workshop was held at Manipal Academy of Higher Education from the 10th – 14th December, 2018. The five-day event was targeted mainly at school teachers to introduce CLIL methodology, as a concept and a practice. In addition to Mr Adi Rajan, British Council Training Consultant and Cambridge CELTA tutor, the workshop was facilitated by various coordinators and members of the CLIL@India team. 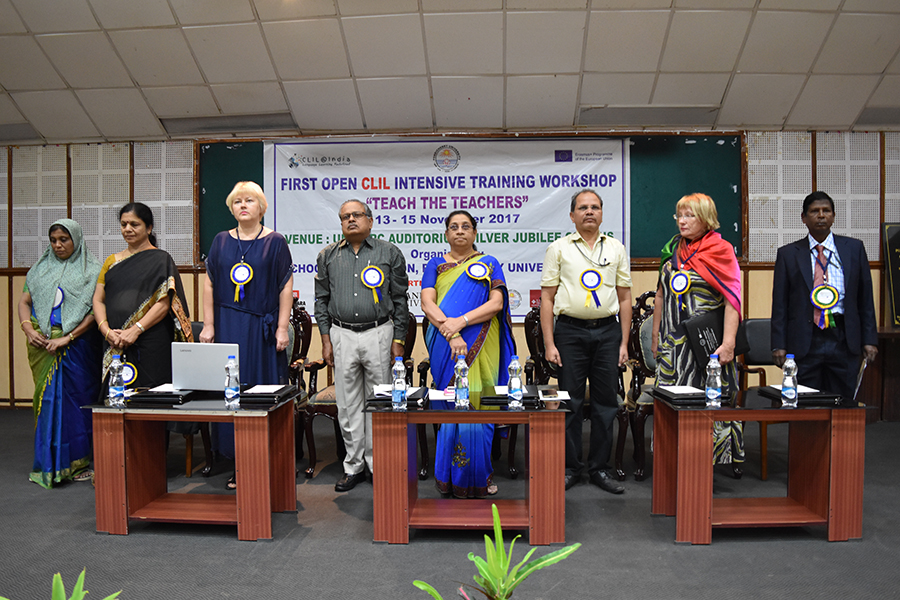 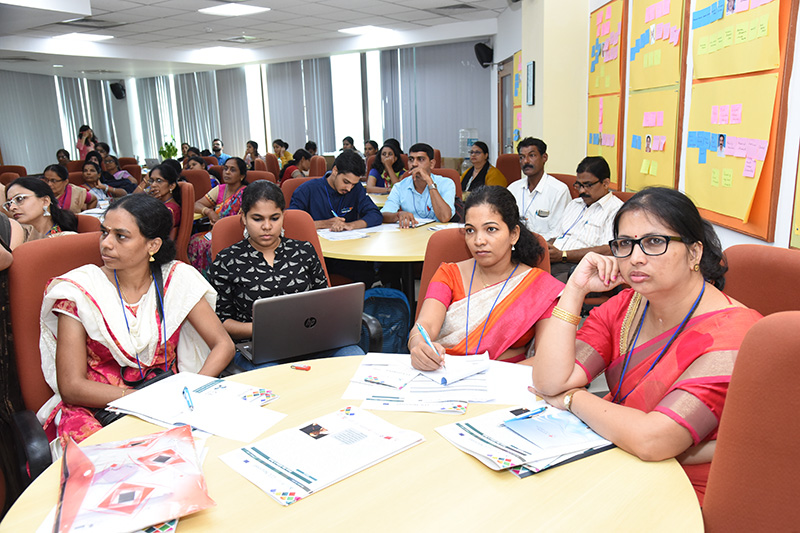 The workshop aimed to create an environment that was a merging point between method and praxis, to ensure that the participants took back practical experience with them along with the conceptual basis on which CLIL is constructed. Keeping in with the spirit of CLIL, the sessions were conducted in various languages, including English, Hindi and Kannada, all being the intervention languages of CLIL@India, envisioning what a CLIL atmosphere would look like.

The first day focused on familiarising the participants with the CLIL approach, and its utility in the Indian education landscape. The day began with the Executive Director of CLIL@India, Dr Deepesh Chandrasekharan, elucidating the multilingual contextual reality of India, wherein the CLIL approach is to be actualised.
Ajinkya Deshmukh and Deepti Sreeram of the Manipal CLIL@India team led the next session, jointly explaining the methodology or practices employed in CLIL teaching, distinguishing it from other forms to give a clearer picture to the attendees.
The second half of the day witnessed active engagement and interaction as Ms B K Dhanalaxmi, Consultant/Teacher Trainer at CLIL@India and Amrutha Yathish, Research Associate at CLIL@India Project, using Kannada as the medium of communication, discussed various aspects of CLIL in action at Manipal.
The final session of the day was led by Dr Mumtaz Begum, Coordinator of CLIL@India, Pondicherry University, on active learning strategies to implement CLIL. The day ended with a scenic seaside drive to Mattu beach with the Resource persons of the workshop.

The day began with a dynamic session by Mr Adi Rajan, British Council Training Consultant and Cambridge CELTA Tutor, on Evidence based Activities for Learning. Rich with activities, the sessions allowed the participants to open up, with the use of various tools that the teachers could use in as part of their teaching method. The session was engaging and interesting.
The second session was a continuation of the session of Active learning strategies to implement CLIL by Prof Mumtaz Begum, joined by Dr Sridevi, a member of the CLIL@India team Pondicherry University, from the previous day.
The day ended with as much enthusiasm if not more with the session conducted by Dr Vaishali Jundre, Dr Yogita Bhamare, Ms Jayasree Menon, team of CLIL@India, Symbiosis International University. Pedagogical analysis of content through the 4 Cs: Content, Cognition, Communication and Culture and 3 As: Analyse, Add and Apply was introduced to the participants through fun and practical activities.

Mr Adi Rajan commenced the third day with continued gusto on the utility of translanguaging, a concept very relevant in the Indian multilingual context. The aim of the session was to introduce the teachers to use translanguaging tasks as a tool in the classroom to implement CLIL using short authentic texts.
The second session was taken by Ms Devika Rani, assistant professor at Manipal Institute of technology, who having had the opportunity to visit Spain and observe CLIL in practice as part of the first intra consortium camp held at the Faculty of Humanities of the Universidad de Castilla-La Mancha, Spain from 30 January to 3 February, 2017, shared her observations and learnings with the participants.
The second half of the day was steered by the CLIL@India team from Chitkara University with Prof Sangeeta Pant and Dr Parul Sood. The first half centred on strategies that promote comprehension, with a focus on a system that works with a three-part framework, before reading, during reading and after reading. The second part led by Dr Parul Sood brought attention to the specific methods to enhance comprehension in the class with the students. The resource persons included activities that allowed a balanced skill-knowledge learning environment for the participants. The day ended with an enriching visit to the Heritage Village, Hasta Shilpa in Manipal.

The penultimate day saw the continuation of the sessions led by the Chitkara team from the previous day on CLIL methodology. The sessions included an elaborate introduction to Dictogloss, a dictation-based production activity that enables both the student and teacher to partake in the learning process, with a balanced inclusion of aspects of listening, speaking, reading and writing. Prof Sangeeta Pant continued the CLIL Methodology module emphasising interaction activities and strategies. The session saw utilisation of various hands on experience for the participants as they were involved in the activities that may be used in their classrooms in the future.
The third session on Material Development for CLIL classroom was conducted in Kannada by Ms B K Dhanalaxmi, Consultant and Teacher Trainer with CLIL@India Project. For this, tangible material used in prior CLIL interventions were shown as examples to the participants, in order to give a glimpse into the various ways in which the teachers may engage with their students using the CLIL approach.

The overall aim of the five-day workshop was to enable and equip the teachers to understand and use the CLIL approach, and the final day of the workshop was centred around the same. The Manipal CLIL@India team presented various assessment strategies suitable to the CLIL methodology in the first session on the final day of the workshop. Following this, the teachers had hands on experience in developing a teaching plan working in groups, that may be utilised in their classrooms. The teachers were guided with the help of the group activity to develop a lesson plan using CLIL Methodology, led by the Symbiosis team of CLIL@India. The participants themselves led the final session, successfully presenting their lesson plans to their peers, based on the knowledge they had gained in the duration of the preceding days of the workshop.
The participating teachers received the workshop well. The workshop also gave the Manipal team an opportunity to open its CLIL lab for use by the participants as and when required by them.