Public Debate on Language Politics and Medium of Instruction

Public Debate on Language Politics and Medium of Instruction

“There is an intense nativism in the films I make, much like what is found in Polish or Spanish films. Such films cannot be made in another language, because no other language can capture the native wisdom of such languages,” said noted National Award winning Kannada filmmaker Nagathihalli Chandrashekhar. He was speaking at a public discussion on ‘Language Politics and Medium of Instruction: Challenges in a Multilingual World’ organized by the CLIL@India project of Manipal University on Monday.
He added, “A defence of Kannada is not just an emotional response, but a considered intellectual stance. What we need is a constitutional amendment that protects all regional languages.” 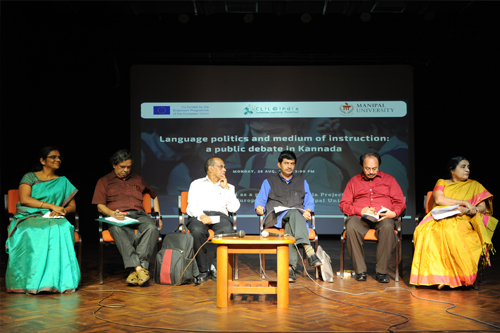 Host of the long running game show Thatt Antha Heli, Naa Someswara also attended the debate and said, “The attack of Hindi on South India is as vicious as Mahmud of Ghazni’s attack on India. Hindi should be rejected even as a third language in our schools.”
Someswara made a scientific case for multilingualism, stating, “An education that ignores regional languages leads only to the development of the left hemisphere of the brain (logical, analytic), to the detriment of the right hemisphere (empathy, creativity). Contrary to popular opinion, it is not impossible to teach science in Kannada. Scientific terms can retain their Latin, Greek or English roots. We need not find a new Kannada word for every scientific term.”

Speaking from the perspective of educationists, Prof Mahabaleshwara Rao, Principal of TMA Pai College of Education said, “Kannada schools are on the verge of extinction, thanks to government apathy and misplaced policy.” He pointed out the lack of audits of English medium schools, leading to a mushrooming of schools that do not follow even the basic regulations of requiring their teachers to have a B.Ed. or D.Ed. degree.
Prof Bhuvaneshwari Hegde, renowned humorist from Mangalore College said, “A common sense approach to learning is important to be developed among children irrespective whether they learn in mother tongue or English. However, such a learning is enabled better in a native language environment. People shouldn’t hesitate using technology that aids learning and using of native language.”

Representing schools’s perspective in the public debate was Abhilasha Hande, Principal, SMS English Medium School, Udupi. She said, “A good school focuses on learning; the language does not matter. It is a myth that those who learn in Kannada necessarily have better conceptual clarity.” She added, “Language lives in the everyday life of people, and not in the pages of books. Globalisation and the IT revolution has fundamentally altered the way we live languages. It isn’t some innate attraction to English, but rather the dependence on English that compels people to learn it.”
The discussion was moderated by Prof Varadesh Hiregange, head of the Gandhian and Peace Studies Centre of Manipal University.